A blog by software engineer and food enthusiast.

Haisum's Blog It's not a bug, it's a feature.

Recently while writing code for a Kubernetes Operator interacting with an external API, I was asked to only retry in specific scenarios such as DNS lookup failure and timeouts. Since many things can go wrong in DNS, the net package may return different error messages depending on what exactly happened.

Out of all 30 years of my life, this would probably be the most memorable year because of the wild wild things going on around us all. Not everything was bad about this year though. At the end of 2019, I had finally made up my mind to leave Java/Fintech and pursue a career in the cloud computing; and by February, 2020 I was working as a consultant for cloud native technologies and automation. Consultancy is a completely different domain from what I had been doing before this job; it’s a very fast paced and challenging career path compared to product based companies I have worked for before this job. As a consultant, keeping up with changing technology landscape has become more vital than ever so I have got about 7 certifications this year. I am now 2x AWS, 2x Azure, CKA, Terraform and VMWare certified. I will probably take a break from certifications for a while now.

I am now AWS Certified Developer

Two months ago, I got my AWS Solutions Architect certification. Now, I am AWS certified developer as well. Here’s my latest certificate: 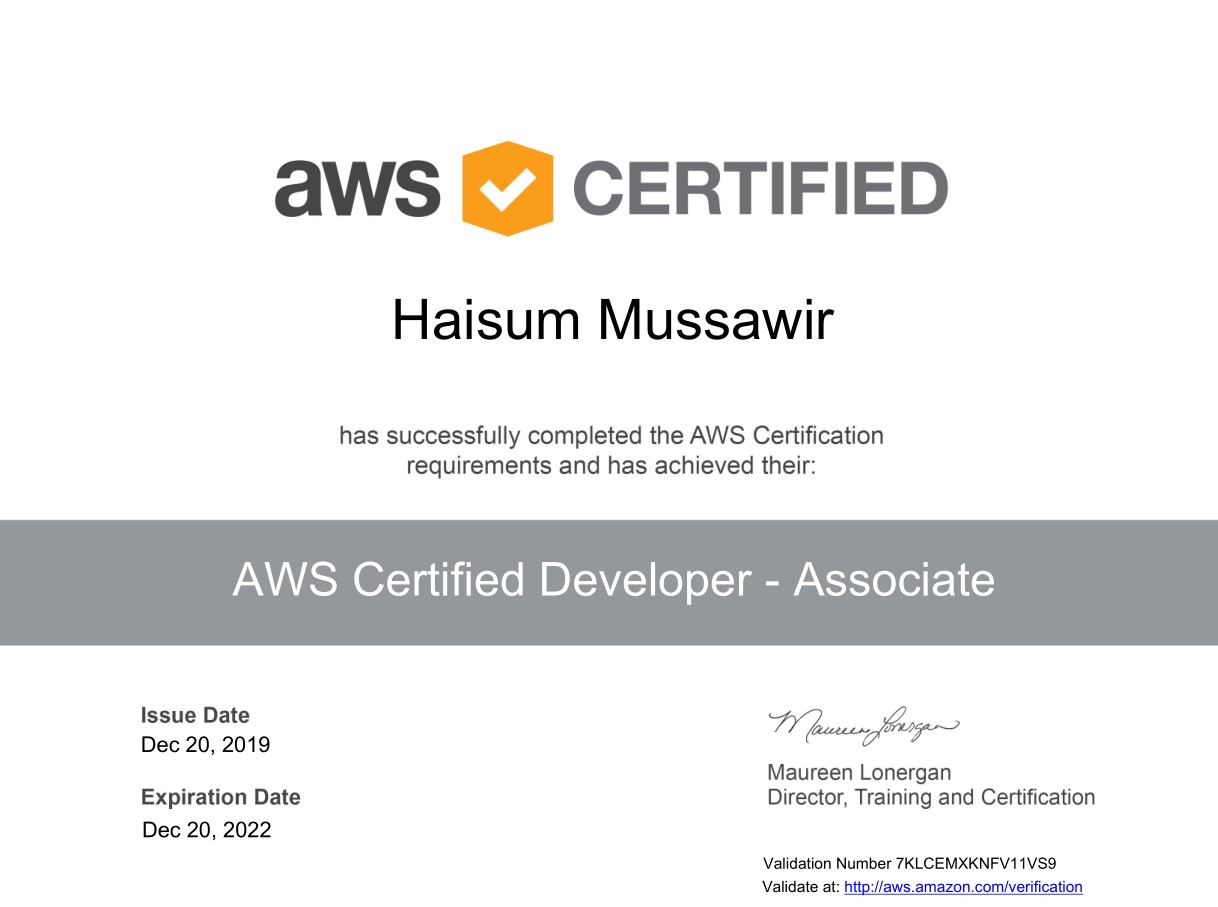 I used Stephane Maarek’s Ultimate AWS Certified Developer course and Jon Bonso’s Practice Tests. These two, along with practicing everything on AWS should be enough for anyone to pass the exam. There isn’t anything which isn’t covered in two of these.

I also have Linux Academy yearly membership so I did around 50% of course they have for this certification. I also gave Linux academy practice test and followed labs there for practice. Linux Academy is amazing but Staphane’s course and Jon Bonso’s practice exams are really comprehensive and are far better than Linux Academy and A Cloud Guru’s offerings.

On Kashmir Blockade By India

As I write this, it’s been two months since people of Kashmir were stripped of their rights and confined in their homes by Indian Government without any communication to outside world.

According to some estimates half of Indian Army is currently deployed in Kahsmir, that’s 700,000 or 7 Million for an area with population of 120,000 or 12 Million. So there’s 1 Soldier for 2 people in Kashmir. When you bring millitary to an area, human rights violations happen. These army men come from all parts of India where they have been brainwashed by their cancerous media about Kashmir. They show no sympathy to people of Kashmir. There have been many reports of rapes, tortures, kidnappings and civilian deaths.

This brutality has affected children and women too. For example, here are several reports by BBC:

Indian government has imprisoned all political leaders of Kashmir as well. So world has no way of listening to voices of locked Kashmiris.

Then no wonder, Kashmiri youth hates India and it’s Army. When they turn to extremisim, they’re called Islamist terrorists and Indians immediately begin to claim it’s Pakistan who is at fault. Pakistan may have done it’s fair bit of shaddy business in past and I am in no way justifying that, but what India is doing right now is 100% on it’s own hands. If there’s a retaliation or blood bath, it is India who will be responsible.

This is what happened in Holocaust. First, Jews were all imprisoned in Ghettos. Communications were controlled or completely cut off and then they were ethnically cleansed by people who thought they were racially superior. India is ruled by BJP which is Hindu Nationalist Extreme Right Wing party. Prime Minister Modi was involved in Gujrat Riots as well, where hundreds of Muslims were massacred. He was Chief Minister back then and silently watched everything unfold and didn’t intervene because he didn’t want to anger his hindu supporters. BJP’s ideology is same as Nazi ideology.

I know a lot of wonderful people from India. Indians are vital part of world. They’re Engineers, Doctors, IT Experts, Economists, Businessmen. They’re everywhere. India has more languages spoken, more religions, more cultures than any other country in the world. They should be the defintion of secularism. Unfortunately they’re being trapped into becoming hindu nationalists. Due to their cancerous media, even educated, intelligent Indians are supporting their government. India has great potential, it shouldn’t dig it’s own downfall by become an extremist country. Any sane voice is silenced. People in India who are sane and do raise sensible points are silenced by calling them traitors. It’s just a very sad situation overall for Kasmiris and Indians.

Unfortunately, world remains silent as Holocaust 2.0 happens in China and India. World did step up in 1939, it’s time we stand against these brutalities once more before it’s too late for humanity.

Other Resources on Kashmir Blockade

Pakistan’s proofs on the State Sponsored Terrorism by India

The moment when the lies of Godi Media were exposed on an international forum. pic.twitter.com/ynBsiWMQcl

This post was deleted because it may violate aws certification NDA.